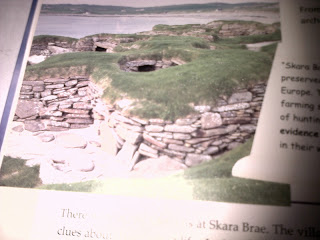 The ancient buried village Skara Brae was found in 1850, when a great gale ripped across the Orkney Island off the north coast of Scotland.

This mysterious site was then excavated in 1920s.

Every thing in Skara Brae was made of stone, and the people seemed to leave their home in a hurry. Did they run away from a nature disaster, or escape from enemy from Norse?

My imagination is that God placed those ancient Scottish people there, built a stone house for them, just like He did for Adam and Eve in the Garden of Eden, this was just another settlements on the Earth, where the weather is colder and the environment is extremely severe. But His experiments failed again because of the wickedness of Human, so he drove out them again, and scattered them over the land of  Scotland.

How to Address Important People

October 24, 2010
It would be very safe to address important people as just "Sir" or "Madam," however high their rank but it would show that you are a cultivated and wel-bred person if you were able easily and naturally to address them in the correct way. A person of lower rank does not make himself humble and ridiculous by using the correct form of address at least once or twice in a conversation. The person of higher rank will, however, be just as embarrassed as his inferior if the formal address is used too often. Be natural, that is the great thing, and if you are not too sure of yourself, watch carefully how others more used to such company behave. Here then are some of the correct forms of address in speaking to titled people: -- The King, The Queen: Your Majesty. Member of the Royal Family: Your Royal Highness. Duke, Duchess: Your Grace Marquis, Earl, Viscount, Baron: My Lord, or Your Lordship. Marchioness, Countess, Viscountess, Baroness: My Lady or Your Ladyship.
Post a Comment
Read more