February 06, 2011
The shield was decorated with the bird, the tree, the fish and the bell. Two fishes with a ring in its mouth are standing at both sides as supporters. On the crest is Glasgow's patron saint Mungo or Kentigern. An old rhyme depicted this mysterious emblems:

The bird commemorates St Serf's tame robin, accidentally killed by some of his young disciples who, being envious of Mungo, their master's favourite, hoped to get him into trouble by blaming him. Mungo took the dead bird in his hands and prayed over it. Restored to life it flew chirping to its master.

The tree, an oak, began its life legendary life as a few hazel twigs. As a boy in the monastery Mungo fell asleep while left in charge of the holy fire in the refectory. Again, trying to get Mungo into trouble, his companions put out the fire. However, when Mungo awoke and saw what had happened he relit it by breaking off some frozen twigs from a hazel tree and causing them to burst into flame by praying over them.

The fish with a ring in its mouth is salmon and it tells a story of adultery. Hydderch hael, King of Cadzow, gave his queen, Languoreth, a ring which she passed on to a courtier with whom she was dallying. Suspecting the liaison, the king took it from him while he slept during a hunting party and threw it in the River Clyde. On returning home the king demanded to see the ring and threatened his wife with death if she could not produce it. Languoreth asked her lover to return it, which of course, he could not do, and in desperation she confessed all to St Mungo who, taking compassion on her, sent one of his monks to fish in the river, instructing him to bring back the first fish he caught. When he did, St Mungo extracted the ring from the fish's mouth and sent it to the queen to restore to the king, thus saving her life.

The bell was given to Mungo by the Pope. 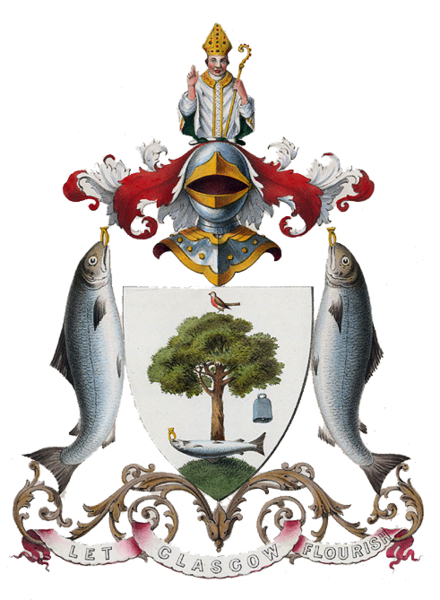