October 07, 2009
From the 1670s, Grenadiers were the elite troops of the British army. The term "grenadier" is derived from the fact that these troops originally hurled iron or porcelain grenades into enemy positions.They were instantly recognizable by their headgear: a tall, mitre cap, like a bishop's headdress, designed to allow them to hurl the small grenades they carried in their packs. Such a hat was more suited to crowd-pleasing on the parade ground of Whitehall than the chaos and filth of a battlefield but the men wore it with pride. 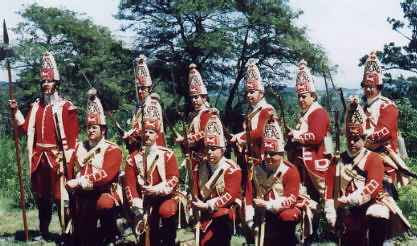