December 22, 2010
This is a well written self introduction for job application two thousands years ago by Tung Fang Suo. What job did he apply for? Well, see the job advertisement by His Majesty 'Wu Ti' of Han dynasty, His Majesty was looking for heroes to fit the vacancies in his royal court:

Exceptional work demands exceptional men. A bolting or a kicking horse may eventually become a most valuable animal. A man who is the object of the world's detestation may live to accomplish great things. As with the untractable horse, so with the infatuated man; -- it is simply a question of training.

We therefore command the various district officials to search for men of brilliant and exceptional talents, to be Our generals. Our ministers, and Our envoys to distant States.

TUNG-FANG SO, lived in 2nd Century b.c., has been popularly known as "The Wag." The following self-recommendation was forwarded by him in response to the job advertisement of the Emperor of Han , Wu Ti, calling for heroes to assist in the government. This well written Resumé by Tung-fang of course resulted in an immediate interview, and so he became at once an intimate friend and adviser of the young Emperor, continuing in favour until his death. He was a very witty and amusing person who even made practical jokes upon the Emperor Himself. On one occasion he drank off some elixir of immortality, which belonged to the Emperor, and the latter in a rage ordered him to be put to death. But Tung-fang So smiled and said, "If the elixir was genuine, your Majesty can do me no harm; if it was not, what harm have I done? He was spared by the Emperor otherwise a death penalty if this happened to other persons.

Below is the memorial how he described himself according to the job specifications:

I lost my parents while still a child, and grew up in my elder brother's home. At twelve I learnt to write, and within the year I was well advanced in history and composition. At fifteen, I learnt sword exercise; at sixteen, to repeat the Odes and the Book of History -- 220,000 words in all. At nineteen, I studied the tactics of Sun Wu, the accoutrements of battle array, and the use of the gong and drum, also 220,000 words in all, making a grand total of 440,000 words. I also carefully laid to heart the sayings of the bold Tzu Lu.

I am now twenty-two years of age. I am nine feet three inches in height.  My eyes are like swinging pearls, my teeth like a row of shells. I am as brave as Meng Fen, as prompt as Ch'ing Chi, as pure as Pao Shu, and as devoted as Wei Sheng. I consider myself fit to be a high officer of State ; and with my life in my hand, I await your Majesty's reply.

* Sun Wu was a skilful commander who flourished in the sixth century before Christ, and wrote a treatise on the art of war.

* Ts One of Confucius's favourite disciples, specially remarkable for his courage.

* He, nine feet three inches in height, seems to be a very tall man, but we must understand a shorter foot-rule than that now in use.

* A pretty love story about Wei Sheng. Wei Sheng was a young man who had a date with a young lady beneath a bridge. At the time appointed she did not come, but the tide did; and Wei Sheng, rather than quit his post, clung to a pillar and was drowned. 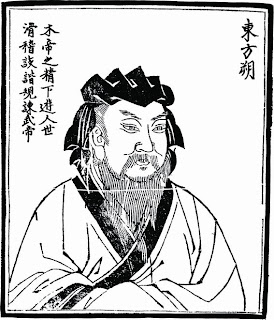 "Why" used as exclamation, an example from "An Inspector Calls"

July 08, 2020
When "Why" is used as an exclamation, it would normally be followed by a comma instead of an exclamation mark, it's an interjection used to express surprise, disagreement, indignation, hesitation, impatience etc:  //Why, don't be silly! (Collins) //Why, here's what I was looking for! (Merriam Webster) In J. B Priestley's An Inspector Calls, when Arthur Birling talked about the greatest technological progress of the time such as airplanes, automobiles, and ships, he said: And then ships. Why , a friend of mine went over this new liner last week – the titanic – she sails next week – forty-six thousand eight hundred tons – new york in five days – and every luxury – and unsinkable, absolutely unsinkable.  He use "Why" to express surprise. Arthur was born into a humble background and became a prosperous manufacturer, he was pompous but rather " provincial " in his speech.
Post a Comment
Read more